Rekindling Scientology; Training Outside the Church

I came to ASHO in the late  ’70’s with the dreams of becoming a Class VIII auditor.  Training then was considered the most important aspect of Scientology.  Everywhere you went people were co-auditing and all of your friends were a class something or other auditor.  People were having fun and actually going up the Bridge as  ASHO had about 700 people on the Briefing Course alone!  The place was bursting and people that were happy and winning.

I got in Scientology in Tijuana of all places.  I moved  there with my family because my father started  a job as a college professor at the new University and he was a founding member of the Faculty of Law.

At that time I was searching for spiritual truth when Helena Hurtado told me about Scientology.  I loved it because of the , “What is true for you…” principle.

Here is beautiful Tijuana. It was fun living there back in the 70’s.

I consider that in order to truly achieve spiritual freedom one must also get educated.  Not only in Scientology but in general, one must have knowledge. Just imagine the personal satisfaction of being able to help others when life seems harsh and you are able to do something about it. I still like the Tech, well, most of it.  I apply the Tech and I see that it works and I feel satisfied that at the end of the day I helped someone to change their life.

However,  Scientology training has become obsolete in the last fifteen years or so and a lot of people have  told me that it is impossible to become an auditor in the CofS,  because of the long runway and outside is not so easy either.  I say no,  instead there seems to be a renaissance on training outside the church and many a good souls are dedicating their lives to helping others.

Center for Spiritual Research and its Applications

Silvia Kusada Class VI Auditor, OT VIII from Italy, has been delivering Scientology outside the Church.  Silvia speaks Italian, English and Spanish. She also has been traveling all over the world to deliver the OT levels. She is a fine example of what an auditor should be.

She has an OT center in Texas where she audits and helps those  OTs who have stopped Solo Auditing for one reason or another, to have wins again.  She is also doing research on the original work of LRH from the 1950’s when it all began.

Silvia and I share the same ideals and we have discovered that when many beings work together toward  a basic common goal, life becomes magic. Things align and very little effort is required. Silvia is like a sister to me and I trust her and love her very much.

I want to say here that it had been said that Scientology did not help some people. True, but yet it saved some other people’s lives.  Scientology is NOT for everyone.  Each has to search their own spiritual path in different directions until they find it.

My point of view is that I have a lot of respect for my friends who are helping others and that is why I am making  this post on my blog to let others know that there is training outside the Church of Scientology.

In Los Angeles and Taiwan, the Helen Chen Academy is very successful, they have made a lot of auditors as well as clears. My friends Helmut Flasch and his wife Helen Chen also have successfully disseminated Scientology all over the world. They are both OT VIII and Helmut is from Austria and Helen from Taiwan. 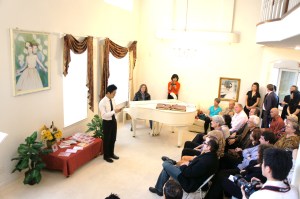 I had the pleasure to attend many of Helen Graduation parties

Training is not only being delivered in English, Italian, Spanish and Taiwanese.  Max and Erica Hauri are delivering the Tech in Switzerland and in Russia as well. They have a training Center in Bern.  Max delivers the LRH’s original Bridge up to OT III and also Captain Bill Robertson’s Tech as well.

This is what Max has to say

“Together with my wife Erica, we built up our Ron’s Org. After six years, 1990, I joined as a fulltime auditor and staff member at our Ron’s Org”.

Here is Max with his family

“Bit by bit we established communication lines all over the world. Today we have a lot of friends from all over the globe, especially from the East European countries”.

“Everyone should be supported with education as to how to achieve success in life. For me Scientology is a union a lot of different wisdoms from a lot of old religions and philosophies. Hubbard brought them together in a form that every person can understand. He developed precious exercises and practices, which can help everyone to develop spiritually, and to make future lives better and more successful”.

Max has been my rock in difficult times and I admire him very much because he is what I envision of a true OT, pandetermined, granting beingness and high theta comm individual.

Bob Mongiello, The Riverside Mission in California and “Scientology Muster”

The Riverside Mission in California, was once the biggest Scientology Mission in the world. The place was bustling with students and PCs under the direction of Bob Mongiello and many other wonderful staff. Then the destruction of the Mission Network took place and all of  the missions fell apart,  including the Riverside Mission.

Bob moved on, and he and his family continued expanding as OT’s  and teaching the principles of the Tech to his children, who have never set foot in a single CofS.  Yet, they are trained as well as very successful in life.  Bob and his then wife Joan Mongiello, raised a great family and never lost their purpose to help others too.

Bob Mongiello and I

Bob and others have recently formed a group called “Scientology Muster.”  The purpose  is to create a stronger group and gather all the Scientologists and people interested in Scientology. There is no Mission yet as it is only in it’s inception.  However, lots of people have seen his videos and have contacted Bob to join his group and pretty soon they are going to be training others.

Here is one of Bob’s videos:

A lot has happened in Scientology, good and bad. Some were helped,  some were not.  However, we all have to take the path that is meant for us.  But as well,  there will always be people like Silvia, Max, Bob, Helen and Helmut, and many others who will be there to help their fellow beings. And that we can all be thankful for.

This entry was posted in Aida's Postings, Sci Political Postings. Bookmark the permalink.

27 responses to “Rekindling Scientology; Training Outside the Church”